These prices are an estimate. Actual prices in Canadian dollars will be communicated to you as soon as Microsoft releases them.

For reference, here are the US dollar prices that have been made public by Microsoft. These increases will apply globally with local market adjustments for certain regions.

Adding unlimited dial-in across the suites (currently included in Microsoft 365 E5 and Office 365 E5) at no additional cost: 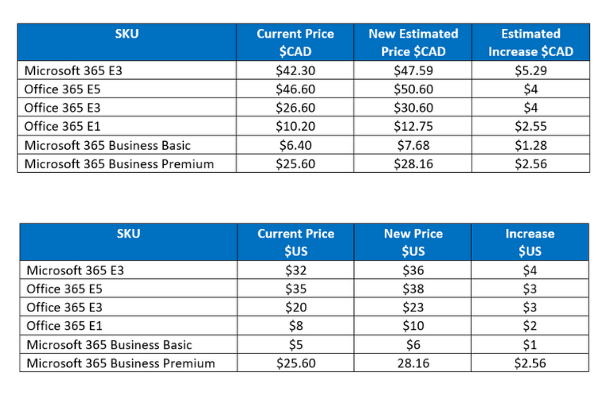 How will this price change impact existing customers?

Existing customers are not impacted until their next renewal on or after March 1, 2022.

Why is Microsoft raising the prices?

Microsoft delivered value over the past 10 years and is committed to continue innovation going forward. Since 2011, Microsoft has added 25 applications and released over 1400 new capabilities to Office 365 and Microsoft 365.

Since launch, Microsoft has added or introduced 19 applications

Since launch, Microsoft has developed and released over 1400 capabilities

Our team at ITCloud.ca is available to answer your questions.